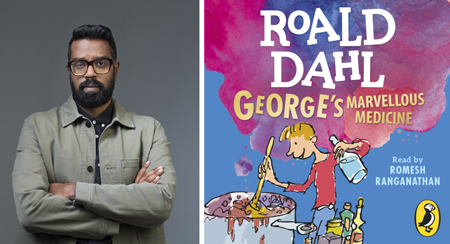 Puffin is excited to announce comedians James Acaster, Romesh Ranganathan and Lolly Adefope as the narrators of three new audio editions of Roald Dahl’s beloved stories, James and the Giant Peach, George’s Marvellous Medicine and The Witches, to be released on 9th June this year.

The talented, fresh and funny voices of some of Britain’s most loved comedians paired with the SFX sound production from the award-winning Penguin Studios will offer listeners an immersive and entertaining experience, appealing to a new generation of readers with all the imagination, heart and humour that fans know and love from Roald Dahl.

James Keyte, Audio Senior Commissioning Editor commented; “We are so excited to add three new names to our list of iconic Roald Dahl narrators, and I can’t wait for everyone to experience these hilarious new recordings. James Acaster’s impromptu singing, Romesh’s wry Grandma and Lolly’s fearsome High Witch produce audio moments that will last you a lifetime. These new audiobooks have been recorded and produced by the full Penguin Random House Studio team and you can hear how much fun they have had on every minute of the recording.”

The Roald Dahl Story Company said; “Listening to Roald Dahl stories on audio is a brilliant way for the whole family to share the experience, whether travelling in the car or relaxing together at home. The calibre of these new readings is quite exceptional. Huge thanks to Lolly Adefope, James Acaster and Romesh Ranganathan for bringing such energy, joy and nuance to each of their performances and, as ever, to Penguin Studios for the unparallelled SFX sound production.”

The new audio editions will complement an existing suite of Roald Dahl audiobooks, such as Matilda narrated by Kate Winslet and The Twits, narrated by Richard Ayoade. The re-recordings mark the start of a long-term strategy to bring more Roald Dahl stories to life in audio over the next three years, with the aim to make Roald Dahl the leading brand in the children’s audio space.

Lolly Adefope, star of BBC’s Ghosts, said; “It was a joy to narrate such an iconic story as Roald Dahl’s The Witches. I found it just as scary as when I read and watched it as a child, and I can’t wait for you to listen.”

Romesh Ranganathan, comedian, author and TV presenter, said; “I’m really excited to have narrated the new audiobook of George’s Marvellous Medicine, in which George decides to teach his nasty old Grandma a lesson. My boys have really got into audiobooks over the last couple of years, they’ve certainly helped me out on some long car journeys. I can’t wait for them to listen; I think they’ll be impressed by my Grandma voice – it’s the performance of a lifetime.”

James Acaster, star of Live at the Apollo and host of the Off Menu podcast, said; “I’m thrilled to have narrated the new audiobook of Roald Dahl’s James and the Giant Peach, a story about a boy who triumphs over adversity and embarks on an adventure with various giant insectoid companions, leaving behind his horrid aunts. I had so much fun with this performance, creating different voices for the Earth Worm, Aunt Sponge & Aunt Spiker and Mr Centipede! I hope you enjoy listening to it as much as I enjoyed recording it.”

JAMES AND THE GIANT PEACH narrated by James Acaster, GEORGE’S MARVELLOUS MEDICINE narrated by Romesh Ranganathan and THE WITCHES narrated by Lolly Adefope will publish in Puffin Audiobook on 9th June 2022.