Time to rhyme with Roger Stevens 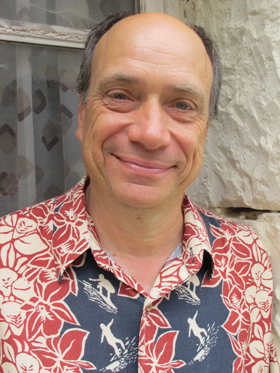 Roger Stevens, author of the children’s poetry book Razzmatazz, helps us to understand and teach rhyme while also making it fun!

Roger Stevens:
Writing poems that rhyme is difficult enough when you are a poet. Teaching children to use rhyme can be daunting. So here are a couple of easy ways to write a rhyming poem. And I hope that, whether you’re an experienced English expert or a science specialist for whom the very thought of writing poetry sends shivers up your spine, you’ll find them useful.

While choosing my ‘best’ poems for my new book, Razzmatazz (Otter Barry), I noticed how I not only use these tips to teach, I also use them when I’m writing my own poetry. Because I find them fun and I hope you will, too.

Work on rough paper and stress that neat writing and spelling are NOT IMPORTANT at this stage. Get ideas down as quickly as possible. Work alongside the children. Tell them you’re learning, too. It will take several goes to write the poem. You can correct spelling and presentation together later.

Remember that rhyme includes alliteration (see snail saga below); repeated vowel sounds (assonance as in bread and heavy); repeated consonants, as in dump and damp; and internal rhyme – where the rhyme is not at the end of the line.

Last Things First
We are all familiar with the child’s poem that begins well but ends with a clunky rhyme or a line that just doesn’t make sense. A way to overcome this is to NOT write the last line last.

Think of an animal.

Line one: I have a hamster.

Line two: His name is LEAVE IT BLANK.

Line three: Something the hamster does. He runs on his wheel.

Line four: Something else he does. He bites my finger.

Now go back and find a rhyme that goes with finger. Sometimes a name will suggest itself. If not make one up. Singer? Slinger? Pinger? It works because no one will notice the clunk simply because it ISN’T at the end.

That’s our basic verse. But like most first drafts, it still needs working on. Read poems out loud at this stage to check that the rhythm is okay. And if anything else can be improved.

Tongue Twisters
This works well with KS1. Think of a subject that is going to be easy to rhyme. And with a first letter that will lend itself to alliteration (quokka, for example, might not be a wise choice). I’ll work with snail. With younger children you might write this as a class poem, or in groups with an adult helper to hand.

In the garden I found a snail

Add a new adjective beginning with S for each new line

It was a smelly snail 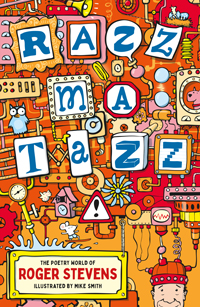 And so on. You could challenge your pupils to see just how long a poem they can write. And to find a good ending.

Snail got by a steamroller.

For some strange reason, children often come up with violent endings! I do encourage finishing with something happy.

Don’t forget it’s crucial to cross out (being messy is part of the process), add new things, change your mind, go off at a tangent. We are not training children to be poets, just to experiment with language and to express themselves. Please HAVE FUN.

And encourage your pupils to send their work to the Poetry Zone, www.poetryzone.co.uk where I will be pleased to show them.

Razzmatazz by Roger Stevens is published by Otter Barry | RRP £7.99