J.K. ROWLING AND THE CHRISTMAS PIG 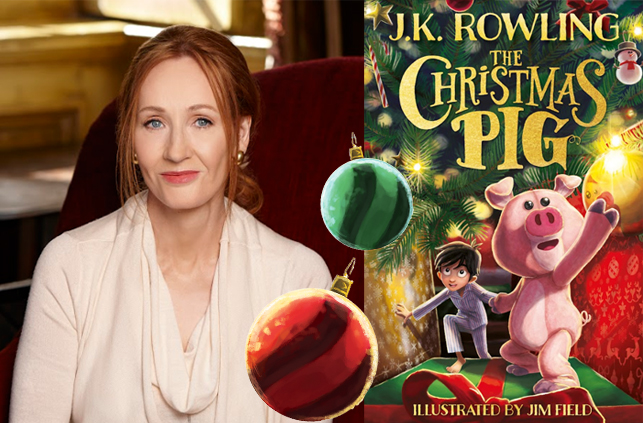 Primary Times caught up with J.K. Rowling about her newest children’s book, The Christmas Pig

Her first children’s novel since Harry Potter, The ChristmasPig, illustrated by Jim Field, is the story of a little boy called Jack, his beloved toy, Dur Pig, and the toy that replaces Dur Pig when he’s lost on Christmas Eve – the Christmas Pig. Together, Jack and the Christmas Pig embark on a magical journey to seek something lost, and to save the best friend Jack has ever known.

If you had to describe the character Jack in three words, what would they be? How about the Christmas Pig?
Jack is brave, loving and a liמּ le lost, though he fi nds himself through his adventure with the Christmas Pig (CP for short), and I’d describe CP in exactly the same way.

Where did you write the story?
I wrote most of the story in my writing room in the garden, but I remember mapping out the Land of the Lost whileour family was on holiday. My children were playing on the beach and I was huddled beneath a sunshade, drawing maps and thinking through the logistics of the world.

Did you have a treasured toy growing up?
My equivalent of Dur Pig was a large, blue-eyed, pink and white teddy bear, which was bought for me by my grandparents. I ended up calling him Henry, after one of the trains on Thomas the Tank Engine. He’s still with me, bald in places due to my habit of picking at his
fur when I was very small.

Do you lose things? What’s the worst thing you have ever lost?
I lose things constantly. It’s one of the things that irritates me most about myself. The worst thing I ever lost was my mother’s engagement ring; it still makes me sad to think about it.

Why are there no socks in the Land of the Lost?
Very, very good question. There should have been at least one sock! It might be because I’m so used to losing socks. I’ve started to think they all come in mismatched pairs.

If you had to get stuck in The Land of the Lost, where would you choose?
Though in many ways it’s quite creepy, I must admit that I love the City of the Missed, for its beauty and the oddity of some of the Things that live there. However, if I had to be stuck anywhere, I’d definitely be on the Isle of the Beloved.

The Christmas Pig by J.K. Rowling, illustrated by Jim Field, is out now, just in time for Christmas.