Birmingham 2022: Details of the international route for the 16th official Queen’s Baton Relay 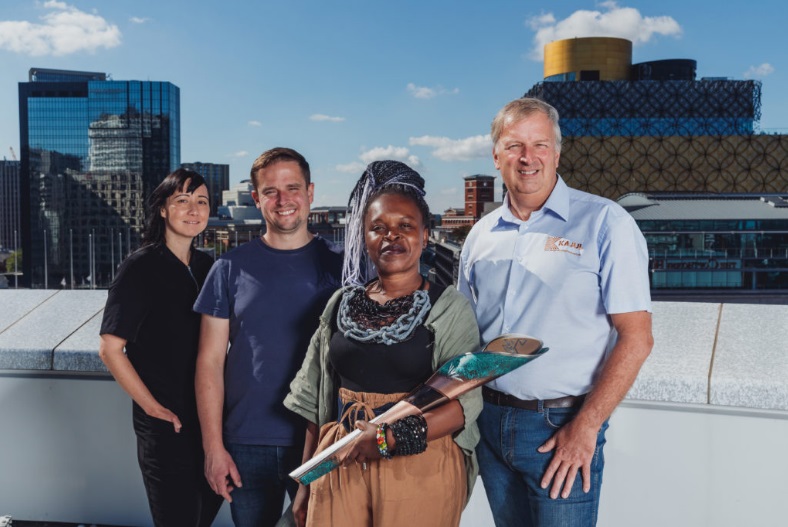 The Queen’s Baton Relay is a Games tradition that celebrates, connects and excites communities from across Commonwealth during the build up to the Games.

The Relay began on 7 October 2021 at Buckingham Palace, where Her Majesty Queen Elizabeth II placed Her message to the Commonwealth into the Baton. The Baton then took on an incredible 294-day journey through all nations and territories of the Commonwealth, arriving back in England in July 2022.

The Baton was conceived in an innovative West Midlands collaboration that fuses art, technology, and science. Product designers and engineers Raymont-Osman Product Design, design and development specialists Kajul, both based in rural Warwickshire, along with Coventry-based MAOKWO, headed up by artist Laura Nyahuye, each injected their creativity and expertise into the Baton. The technology within the Baton is the work of BOM (Birmingham Open Media), a leading centre for art, technology and science in central Birmingham, dedicated to ‘creative innovation with purpose’.

Influenced by her Zimbabwean heritage, artistic skills, activism and community engagement work, Laura brings her passion for tactile and non-precious materials, coupled with the influence of young voices, and lived experiences to the design of the Baton. Using a multi-medium approach, Laura and a team of young creatives at MAOKWO explored themes of the meaning of the Commonwealth, sustainability, the strength and fortitude of women within Commonwealth communities, which has directly influenced the Baton’s design and concept.

The Baton champions the individuality in humanity and celebrates bringing people together. It embodies the idea that every individual has distinctive lived experiences that are threaded together and woven into a collective tapestry of cultures. The Baton form is entwined with unique components and displays connectivity to represent the power of collaboration.

The Baton will travel an epic international route, spanning an impressive 269 days, spending between two and four days in each nation or territory, covering approximately 90,000 miles (140,000 kilometres), having over 7,500 Batonbearers trusted with the once-in-a-lifetime opportunity to carry the Baton.

Over the course of the Relay, the Baton is set to spend Christmas Eve in the Seychelles, will bring in the New Year in the Maldives and plans to be in Jamaica over the Easter weekend.

Flying out from Birmingham Airport, the first stop on the Queen’s Baton Relay is Cyprus on 9 October, shortly followed by Malta.

Arriving in Africa on 16 October, the Baton will take in the rich cultures of all 19 Commonwealth countries on the continent, as well as a stop on the volcanic island of Saint Helena.

After three days in Pakistan, the Baton will spend New Year’s Day in the Maldives, before visiting Sri Lanka, Bangladesh and spending four days in India between 12-15 January 2022.

The Baton will journey across Southeast Asia, visiting Singapore, Malaysia and Brunei Darussalam in January, and travelling to the Pacific Islands in February, including a visit to the smallest island in the Commonwealth, Nauru.

New Zealand will host the Baton on Commonwealth Day during a visit from 12 until 15 March, before four days in Australia (17-20 March), hosts of the Gold Coast 2018 Commonwealth Games.

The Baton will spend two months travelling around the Caribbean and Americas, including visits to The Bahamas, Jamaica and Barbados, and reaching the islands of St. Kitts & Nevis and St. Vincent & the Grenadines.

From here, the Baton will spend four days in Canada, arriving on 26 May 2022, before visiting Gibraltar.

After stopping off at the Falkland Islands, Jersey, Guernsey and the Isle of Man in first three weeks of June, the Relay will have an extended duration of five days in Scotland, four in Northern Ireland, five in Wales and 25 days covering the length and breadth of England.

During each visit, nations and territories will host events and activities that showcase untold stories from Batonbearers, athletes, and young people who are striving for change in their community, as well as showcasing a project that addresses at least one of the 17 United Nations Sustainable Development Goals.

The global journey will conclude at the Birmingham 2022 Opening Ceremony where the final Batonbearer will return the Baton to Her Majesty The Queen.

Martin Green, Chief Creative Officer at Birmingham 2022, said: “The Queen’s Baton Relay is a special tradition for the Games and a fantastic opportunity to connect the Commonwealth as we countdown to Birmingham 2022. Unveiling the Baton and its international journey is an exciting milestone for us, as we’re just days away from the official launch of the Relay.

“The Baton is the stunning result of art, traditional craftmanship and innovative technology, all designed and made right here in the West Midlands, and I can’t wait to see it embark on its epic journey where thousands of Batonbearers will interact with it. It will be visiting some wonderful places before arriving back here in Birmingham for the Opening Ceremony on 28 July 2022.”

Commonwealth Games Federation President Dame Louise Martin DBE said: “The Queen’s Baton Relay is one of the most special aspects of the Commonwealth Games as it so vividly symbolises the friendship, respect and unity across our 72 nations and territories.

“When Her Majesty The Queen places Her message to the Commonwealth into the Baton at Buckingham Palace next week, it will start a spectacular 294-day journey that will begin the final countdown to the Opening Ceremony.

“I know that communities across the Commonwealth will be so excited to see the Baton as it passes through their own villages, towns and cities.