Beano for Schools has launched Britain’s Funniest Class, the nationwide competition for primary schools, to get children laughing again with their friends and teachers by creating new, original jokes, using the SPaG LOL lesson plans.

Beano for Schools is a familiar destination for teachers up and down the country, looking for resources to release children’s creativity and make complicated topics into fun and engaging lessons. Laughter is in Beano’s DNA, and the free lessons on Beano for Schools are no exception. Children not only really enjoy them, but learn essential life skills, such as financial literacy, comic comprehensions, SPaG and emotional resilience.

Teachers can download the free Beano SPaG LOLz lessons, linked to the KS1 and KS2 curriculum to create new, original jokes with their class. The jokes can be submitted by Thursday 20th May, for a chance to win a Beano assembly for the school, an illustrated portrait of the winning class published in the Beano comic, subscriptions to the Beano comic and book bundles. The 10 finalist jokes will also feature in the new Beano Five-a-Day Joke Book, to be published in September by Studio Press.

The jokes will be shortlisted by a panel of Beano gag makers and a special celebrity judge. The ten finalists will be announced on Beano.com and then it’s up to the nation to vote online to decide who will be Britain’s Funniest Class 2021. 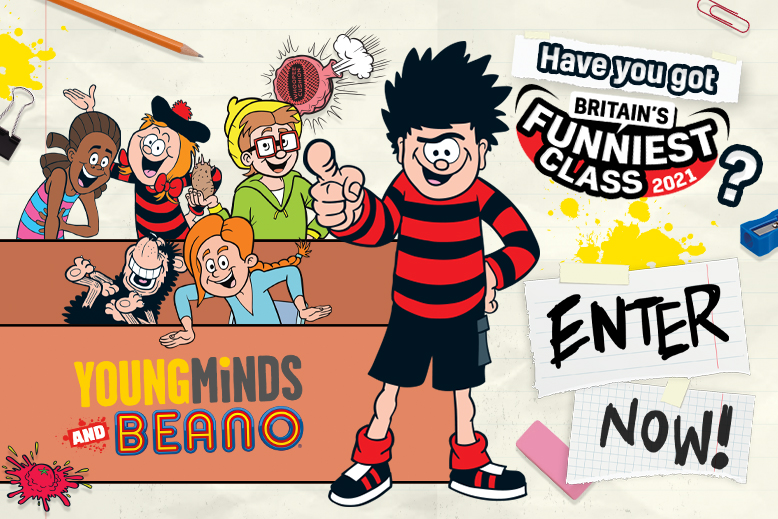 The competition returns for a second year following a hugely successful launch in 2019, which saw Fox class from Castlewood Primary in Horsham crowned winners with their joke “At the bank a lady asked me to check her balance.........so I pushed her over”.

“We’re on a mission to help teachers do what they do best and put the LOLZ into learning”, says Mike Stirling, Head of Beano Studios Scotland. “Our SPaG LOLz joke writing lesson plans stem from the firm belief that laughter has an amazing power to release kids’ creativity and confidence and is incredibly beneficial to their mental health and all aspects of their learning experiences in the classroom and out. Together with our good friends YoungMinds, we want to help bring laughter, hope and positivity back to the classroom and celebrate the tremendous ongoing support teachers have given pupils, their families and each other throughout the pandemic.”

Classes can source further inspiration from Beano’s ‘Joke Generator’ which hosts 80 years’ worth of classic jokes at www.beano.com/jokes.