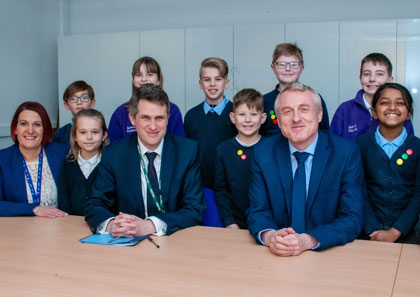 The Secretary of State for Education, Rt Hon Gavin Williamson MP, paid a visit to Leamington Primary & Nursery Academy in Sutton in Ashfield to see for himself the inspirational journey to success the school has been on.

During the visit the minister met with Head teacher Kaye McGuire, school staff and members of The Flying High Trust; lauded as one of the highest performing primary multi-academy Trusts in the country and which welcomed Leamington Primary & Nursery Academy into its organisation in 2017.

Speaking of his visit the Education Minister said, “It has been absolutely amazing to visit Leamington and to see what a wonderful school it is. What a tremendous impact they are having on children's lives.

“When you think about the journey that the school has been on and what the whole community has been able to achieve it is truly inspiring. Certainly, many lessons can be learnt as to how we can look at using that experience in other schools across the country. It’s a real credit to the Flying High Trust and how they have taken the school on that improvement journey.”

Chris Wheatley OBE is CEO of The Flying High Trust and said the visit allowed the school to take stock of its achievements. “The visit by Gavin Williamson allowed us as a Trust, and Leamington’s leadership to reflect on the journey the school has made since joining us in 2017. That journey has been a transformation in terms of the standard of education on offer at the school and the community is now getting the educational high standards that its children thoroughly deserve.

“The Flying High Trust ethos is epitomised by this school; one in which we strive for equality of opportunity regardless of barriers and one which allows children to flourish and succeed. Leamington children and staff under Kaye’s leadership should be proud that they are seen as a positive and inspirational example to others and as a Trust we couldn’t be more proud that that has been recognised first hand by the Secretary of State for Education, Gavin Williamson.”

MP for Ashfield, Lee Anderson, joined the Secretary of State on the visit and said, “I felt incredibly proud to be able to accompany the Education Secretary around Leamington Primary and Nursery School. The turnaround at this school has been nothing short of amazing. The Flying High Trust have proven that with great leadership and a willingness to face challenges head on that anything is possible. I cannot praise the staff and Flying High Trust enough for what they have done. I look forward to returning to this school in the future.”

During the visit, there was a vibrant minister’s question time with children from the school’s council asking what the education minister does in his job, how he intends to make a difference, and what he thinks is the most important thing in education. Alongside these challenging questions, he was also asked about his favourite football team, to which the minister responded that he preferred cricket!

The minister said the children’s questions were thoughtful and on a par with the difficult questions asked in Parliament. “You are never quite sure what questions children are going to ask you and so you will always feel a great sense of nervousness!”

During lessons the education minister spoke to pupil Finley Layton (year 2) about the work he was doing in class and Finley said, “I told him we were looking at an owl who was learning how to fly. He asked me how the big owl in the picture was feeling and I told him that he is feeling worried because the little owl might fall off the branch because he doesn't know how to fly yet. He doesn't want the little owl to hurt his wings when he tries to fly.” When asked what Finley’s impressions of the minister were, he said, “I think he is someone important…and he was nice to talk to.”

Kaye McGuire is Head teacher at the school which recently received a glowing Ofsted report of good in all areas with outstanding features. She said, “It's a huge compliment that the Trust would select Leamington and really represents the hard work and determination of the whole school community to make Leamington the best it can be.

“The children formulated some really challenging questions for the Secretary of State and acted in a truly professional way, whilst letting him know how great the school is in true child style! Some of the children were representatives of our school council and the experience will help them understand the structure of leadership- right to the national level.” 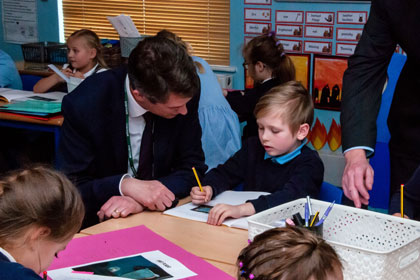 Kaye says that the school has no intentions of standing still. “We will not stop until the school is outstanding, providing opportunities for our children and families to reach potential and achieve their dreams. Children and family are at our core and the relentless drive of the team will never waver. We enjoy every second with our children and are proud of all of them. Working with the Flying High Trust will help us reach our school potential for the children as there are opportunities for staff to excel also and a wealth of expertise to support.”