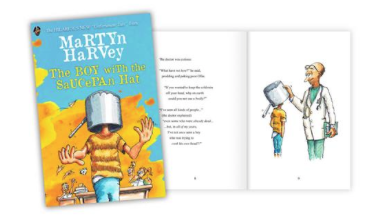 We’re celebrating the release of a children’s storybook, with a percentage of sales going towards our vital work.

Martyn Harvey, 56, is releasing 'The Boy with the Saucepan Hat’ this March, Brain Tumour Awareness Month. The story, aimed at children aged six and above, explores the humorous tale of a 10-year-old who gets a saucepan stuck on his head, while dreaming of fighting a dragon.

Martyn, from Ramsgate, Kent, was inspired to fundraise for Brain Tumour Research following his aunt’s diagnosis with the disease. Doctors believe that her inoperable, low-grade tumour had been growing for more than 20 years before it was detected.

He said: “I’m really excited to release my debut book, having written but not published dozens of children’s stories over the years. It’s amazing to finally see one of my tales come to life. Having seen an advert for the charity Brain Tumour Research’s Wear A Hat Day, I decided to donate a percentage of sales to the charity. It’s a cause close to my heart.”

Martyn will be running the Liverpool Half Marathon for Brain Tumour Research, donning a saucepan on his head. He hopes to raise £1,000 by completing the challenge on Sunday 15 March and you can sponsor him here.