SCHOOLCHILDREN PUT THEIR BREXIT QUESTIONS TO THE PRIME MINISTER 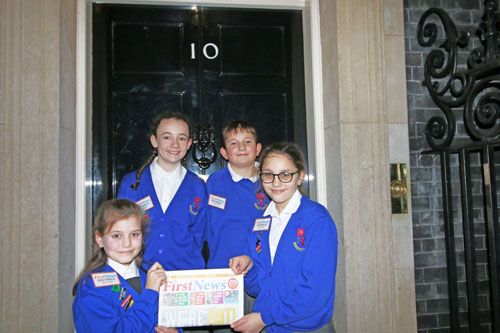 20 First News readers attended a special children’s lobby with the Prime Minister at No10 Downing Street yesterday, where they were given the opportunity to ask questions about what Brexit will mean for them.

The 8-14 year olds came from around schools around the country and spent two hours with Boris Johnson inside No10. The children also presented the Prime Minister with the First News Children’s Charter for Brexit, as voted for by 7000 readers.

“What do you think the opportunities for young people will be once we’ve left the EU”;

“How do you intend to ensure our NHS remains free”;

“As technology is so important, how will you ensure all children will have the same opportunities when some schools don’t have everything that other schools do”.

“How will climate change affect job opportunities in the future?”

With regard to the question about the NHS – asked by a Stretford High School pupil, the Prime Minister explained that a ‘record amount’ of funding is being put into the NHS - £34bn – the greatest ever investment in the Health Service.

In response to the question about schools funding, the Prime Minister talked about his commitment to putting Gigabit broadband everywhere in the country, that goes to every home providing faster internet connections. And with regard to climate change, the Prime Minister explained the tackling this issue will create “hundreds and thousands of jobs”.

First News ran its own Children’s EU Referendum in 2016 and 74% of those voting opted to remain. Brexit was cited as being one of the children’s biggest concerns with only environmental issues coming higher.

Attending the event were two pupils from RL Hughes Primary School in Wigan, Freddie Moors and Suzy Hall. They said: “Meeting the Prime Minister was unbelievable! We were nervous at first, but he was much friendlier and funny than we expected.

“Originally we thought Brexit was a bad idea because it would be difficult to make trade deals with the EU. However, the Prime Minister told us that now we will be able to make more new trade deals with countries like America.”

English Lead Practitioner at St Michael’s Catholic School in High Wycombe, Richard Long, said: "What an incredible experience and opportunity to take the views and concerns of young people to Downing Street to confront the Prime Minister with their questions and concerns about leaving the EU. It is their voice that needs to be heard as their futures are the ones to face the biggest impact from this decision. A huge thanks to First News for giving two Y8 students from St Michael's the chance to be part of this vital democratic process."

Also accompanying the children to No10 was First News editor, Nicky Cox MBE. She said: “We are delighted that the Prime Minister was able to spend time on the eve of Brexit talking to the people who will be most affected. The results of our Children’s EU Referendum highlighted that the majority did not want to leave Europe, with many of our readers feeling worried and anxious about what it will actually mean for our country.

“The Prime Minister answered all the questions open and honestly. He reassured the children that they shouldn’t worry because by the time they enter the workplace in 10 years’ time, Brexit will have blown over and be a distant memory!

“As parents, we need to be aware that our children do worry about issues like Brexit and it’s vital that we encourage them to read and seek out impartial news – to ensure they get the facts and can make a fair assessment of the situation.”