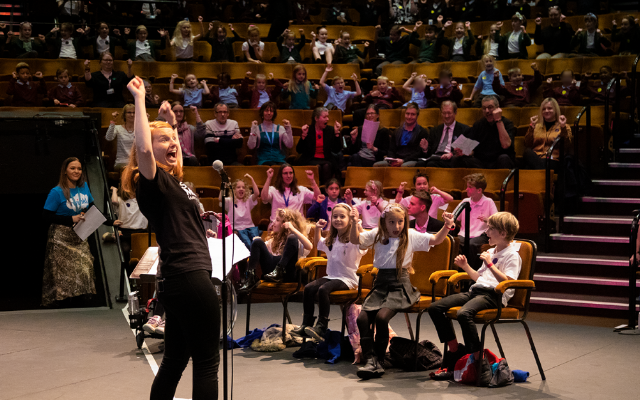 Schools, choirs and businesses from across Sheffield joined the online educational publisher Twinkl to achieve a GUINNESS WORLD RECORDS™ title for the Most people in a singing relay-multiple songs. This is where each word of at least three songs is performed by a different person, in time with the original music.

Over 350 people sang through four songs to break the record, undertaking the challenge to keep exactly to the correct tempo. They performed the popular film songs Beauty and the Beast, originally sung by Angela Lansbury, Edelweiss, from The Sound of Music, Can You Feel the Love Tonight? by Elton John and Hushabye Mountain from Chitty Chitty Bang Bang. The songs were a hit among participating school groups, who brought children as young as 7 to sing along.

Breaking the record was a particularly significant achievement because it was the first time that the title had ever been attempted or achieved. Based on previous similar record attempts, GUINNESS WORLD RECORDS required over 296 people to take part. In total 384 people achieved the record, which was attempted at the Crucible Theatre in Sheffield.

As the Official Education Partner of BBC Children in Need, Twinkl organised the attempt to raise money and awareness for the charity and the projects it supports to help children and young people across the UK.

Jonathan Seaton, CEO and Co-Founder of Twinkl, said: “We arranged the attempt to bring together the wonderful community we have in Sheffield, have some fun and, most importantly, raise money for BBC Children in Need.

“We were overwhelmed by the support and enthusiasm of the local schools and groups that joined us, who all practiced hard and showed huge dedication. It sounds simple, but singing in a relay is much more challenging than you first think - and we were so proud of everyone that took part.

“We would like to say a huge thank you to everyone that supported the attempt including Sheffield Theatres and Sheffield Music Hub. Without the exceptional guidance and support of everyone involved, the event would not have been possible.”

The event was coordinated by Caroline Hallam, a singing leader from Sheffield Music Hub and a live musical accompaniment was performed by professional musician, teacher and composer, Robert Sanders, from the Rocksteady Music School. Colleagues from Grant Thornton volunteered as stewards for the event.

Twinkl was also delighted to welcome GUINNESS WORLD RECORDS adjudicator, Pravin Patel and mascot, Ally Zing, to the event, who joined Pudsey Bear on the stage.

Craig Glenday, Editor-in-Chief at GUINNESS WORLD RECORDS, said: “You can find a well-thumbed copy of Guinness World Records in most school libraries, so I’m delighted that Twinkl brought together local schools and children’s choirs for this record attempt in aid of BBC Children in Need. Congratulations on achieving the record and raising money for such a good cause – you’ve now got even more reason to check out the next edition of the book!”