HOW TO HAVE AN AUTUMN ADVENTURE 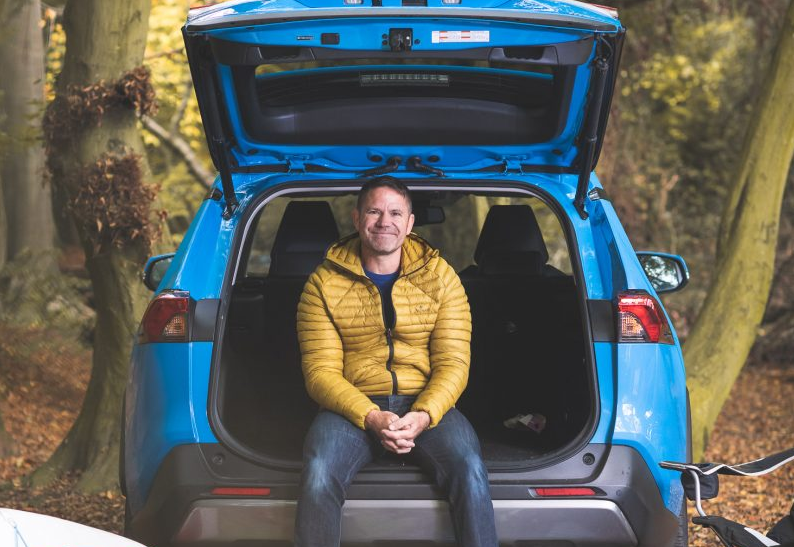 TV presenter, adventurer and wildlife expert, Steve Backshall, has been back on our screens this summer with a thrilling 10 part Expedition series, in which he hiked, climbed, abseiled, canoed, waded and dived across some of the most remote parts of the world in some of the harshest conditions.

Closer to home, with a 15 month old son and another baby on the way, Steve’s busy schedule doesn’t stop him exploring the UK and he shares the following tips on what to pack in the car for an autumn adventure.

1. Paddleboards and kayaks
Steve’s paddleboards go with him wherever possible and he takes inflatable ones which go up in about eight minutes yet pack down to the size of a reasonable ruck sack. You can use them on rivers and lakes, even at sea, which is a major development in being able to go on an adventure holiday from the back of your car. Steve can get two of these in the boot of his Toyota RAV4 without needing a roof rack. He’s an expert canoeist so packs some kayaking kit, too, including a couple of personal flotation devices or life jackets.

2. Climbing Gear
Steve takes a range of equipment for multi-pitch adventure rock climbing, including his cams or ‘friends’ – the things you place into the rock face as you climb – as well as ice axes for winter mountaineering or ice climbing in North Wales and Scotland. He also packs a couple of helmets, ropes, walking poles and crampons.

3. Camping equipment
Must have camping equipment includes Steve’s two man tent, sleep mat and a nice big sleeping bag. He also takes his camping cooker which is good enough to handle almost anything shy of a roast dinner.

4. Making the camp comfortable
Steve advises taking a few things to make yourself comfortable around camp: a nice big tarpaulin, which can double as a shelter, and a couple of camp chairs.

5. Not forgetting the baby gear
Steve and his wife Helen take their son Logan with them on adventures, so they also need to pack the car seat and various other things to keep him comfortable. Steve comments: “Thankfully he’s an adventurer of a baby and loves everything we do together outdoors. He’s sat happily at the bottom while we’ve rock-climbed; he’s been in the canoe with us many times, and he’s the happiest boy on the planet when we’re at the coast. There’s no doubt about it, he’s a beach boy.”

6. The Toyota RAV4
All the equipment described, including the baby gear, fits comfortably into Steve’s RAV4 AWD hybrid. For example, Steve recently went on a ten-day sea kayaking trip to Cornwall and there was enough room to carry all three of the Backshall family together with all their food and camping gear.

Steve emphasises that as someone who works in conservation, it is essential for him to have a vehicle that ticks all the green boxes: “At the moment, fully electric is just a little bit beyond what I can work with. I live in the middle of the countryside and there aren’t many charging points around; and if I was to head up to Scotland or down to Cornwall – journeys I do quite frequently – it becomes quite difficult to accomplish. So, for me, hybrid is the absolute best way to go.”

Steve’s advice on how to stay active during autumn and winter and where to go:
Steve suggests that the number one way of staying active is to enter an event: “You could say to yourself Okay, I know I can jog three kilometres, so I’m going to enter a 5k race at the end of February and I’m going to do it for something that’s important to me, a charity or something. Now you have the motivation needed to give you a push, to force you outside when you may not normally want to.

“You actually get more from exercising in the autumn and winter than in the middle of the summer. It’s more difficult psychologically but when you get outside in that cold, fresh air it’s more invigorating; it gives you more of a kick. Having a training partner can also be good, but just find anything you can to motivate you to get outside.”

Steve also believes the key enjoying outdoor activities in the UK is to plan for the worst, such as rainy weather every day. If it doesn’t rain, it’s a nice surprise. But if it does rain and you’re not prepared your activity can quickly turn into a nightmare.

Steve recommends Cornwall as an ideal place for an adventure, partly because his wife and all her family are Cornish, ‘but the county also has the most staggering coastline – pretty much of anywhere in the world, I’d say – and fabulous wildlife. We love it there.’

Autumn Driving Tips from Toyota
The arrival of autumn brings its own driving challenges so Toyota has put together a list of autumn driving safety tips and advice on how to handle with common seasonal issues:

• Wet, fallen leaves are extremely slippery and can obscure road markings or conceal other hazards, such as potholes, so take greater care when driving through rural areas by reducing your speed – especially around corners – and paying close attention to your lane discipline.

• Morning frost can create icy patches on shaded areas of the road and across bridges and overpasses. Take extra care by reducing your speed.

• Autumn coincides with deer breeding season, so be extra careful driving through rural and wooded areas, especially during sunrise and sunset times when deer are most active.

• Clear leaves from your vehicle, especially around the scuttle panel directly under the windscreen, as these can block drainage holes and get caught under your windscreen wiper blades.

• If the roads are flooded, avoid areas of deep water, which is usually along the road edges or kerbs. If you do decide to cross the water, drive slowly but keep engine revs high to avoid stalling. Be aware that bow waves from approaching vehicles can submerge your car to a much deeper level.

• Do not attempt to cross deep water. A car can float in as little as two feet of standing water.

• Fog is one of the most dangerous weather conditions as an accident involving one car can quickly escalate to involve others if they are driving too close. Leave a distance of at least three second between you and the car in front.

• Use your headlights and fog lights to increase your visibility to others.