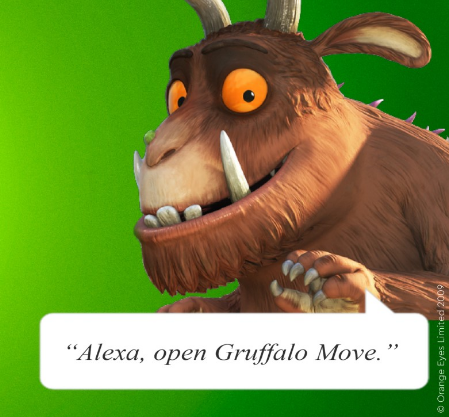 “Gruffalo Move” is an immersive and interactive audio game, available in the UK and the US, which allows users to meet characters from the magical world of The Gruffalo and explore sound and music inspired from Magic Light’s award winning animated special, based on the hugely popular picture book written by Julia Donaldson and illustrated by Axel Scheffler.

Developed with digital product specialist agency Hi Mum Said Dad, “Gruffalo Move” – created for 3- to 6-year-old fans of the book and film – encourages children to get up and get active. After answering questions to identify the character, they are then given a fun activity encouraging them to take part at home and move about like that character. They can try to tiptoe like Fox, "toowhit toowhoo" with Owl and slither with Snake, as they meet a new animal day by day. Once they have guessed all five characters and completed the activities, they will be rewarded with a secret surprise.

The Gruffalo has already enjoyed digital success with the innovative Gruffalo Spotter App, a unique collaboration between Magic Light and Forestry England which brings to life the characters from the book in their natural forest setting. A No. 1 in the kids’ chart on the app store with over 400,00 downloads when launched in 2017, the app received a BAFTA-nomination.

“Gruffalo Move” Alexa Skill is yet another first in a year that has seen a number of activations to celebrate the 20th anniversary of the publication of Julia Donaldson and Axel Scheffler’s enduringly popular illustrated children’s book. February saw The Gruffalo’s first appearance on a coin when the Royal Mint released a special commemorative 50p piece, and Royal Mail plc released a set of 10 commemorative Special Stamps, including four with specially commissioned new illustrations of the book’s characters from Axel Scheffler, in October. Other exciting activity across the year has included the Global Gruffalo campaign which set loose 20 cuddly Gruffalos around the world; special anniversary Forestry England picnic parties; bespoke summer celebrations at Chessington World of Adventures resort; open-air cinema mini festivals with Luna Cinema and a pop-up shop in Covent Garden.