Summer holiday boredom is said to peak today, as new research reveals a third of young children say their parents spend too much time on gadgets 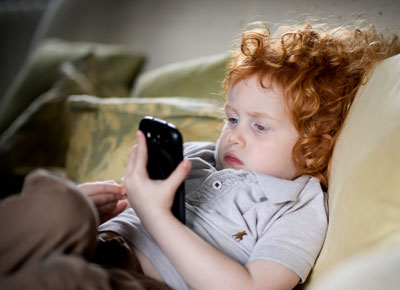 Amid alarmist reports that children spend ‘too long’ on digital devices, Start-rite Shoes has turned the tables and given children aged seven-to-eleven the chance to reply. Carried out in the school setting, with no parental input, the results reveal an honest account of digital influence in British homes.

93 per cent of the children own some kind of digital device but almost half (45 per cent) of their parents don’t set any rules on how long they can use it.

Some stark admissions from the 7-8 age group reveal just how much parents are now relying on screens for entertainment. Nearly half (46 per cent) think they spend more time online or watching TV than chatting with their family and 39 per cent believe their parents or carers spend too much time on gadgets. For 15 per cent of these younger children, this makes them feel sad.

Left unsupervised, a fifth (20 per cent) of the younger children aged 7-8 admit to using their devices for 4 hours or more a day and this digital reliance leads 71 per cent in this younger age category to admit they would feel sad or lost if their device was taken away for a week. Whatsmore, 2 in 5 of these children (44 per cent) confess to using their device in secret, with a quarter (24 per cent) using them after bedtime. In response, half (49 per cent) of all parents with children aged 7-8 use devices to control behaviour (more so for parents with boys) and while, 16 per cent threaten to withdraw devices, they never do.

Technology is also used as the top form of entertainment for long car journeys.  Children aged 7-8 are most likely to say they listen to music (36 percent), play games or apps on a handheld (39 per cent) or watch films (37 per cent) to stave off boredom.

When asked about the summer holidays, over a third (38 per cent) of all the children stated either a ‘games console, mobile phone, tablet computer’ or their ‘internet connection’ would be the hardest to give up, but contrary to the popular view in recent parent-led surveys, almost half (44 per cent) were looking forward to spending more time with their family and playing outdoors, compared to only 5% who want to spend more time online.

In response to these findings, and a recent study¹ which estimated that parents will spend more than three thousand pounds entertaining their children during the holidays, Start-rite is calling for British families to put down their gadgets and play together, passing on the much-loved games from our youth, before they are lost to a flat screen. Remember 40:40, British Bulldog, Elastics and Grandmother’s Footsteps?  Using #passiton the brand hopes parents will share these beloved games, which provided us all with hours of free summer fun.

Popular parenting blogger, Leta Elliott from www.attachmentmummy.com commented: "To be honest, I was shocked by the survey’s findings: who would want their child to spend more time in front of a screen than talking to their family?  Whilst there’s no denying that technology is only going to become more influential in all of our futures, I still believe that real life is far more important, especially in childhood.  Playing car games, reading real books, playing outside, enjoying old-fashioned games, and spending time with family and friends is far more important, and more likely to create happy memories of childhood than time in front of a screen.  It’s not about quality time even, but about real time, enjoying the simpler things in life and having fun!"

Leading Biomechanics Coach and Chartered Physiotherapist, Martin Haines who advises Start-rite Shoes explains why it’s important to keep our children active: ‘That so many children choose to spend over 2 hours per day on a digital devise doesn’t surprise me, but it does concern me. A sedentary lifestyle can seriously harm a child’s development as their gait continues to develop until the age of 15. Movement is essential for the body’s physical development so it is important that we encourage our children to lead active lives if they are to develop and grow healthily.’

An emerging digital bond
The research also showed how much the next generation is becoming bonded to new media. 28 per cent crave a new phone or tablet for their next birthday present, above visiting another country (18 per cent), a TV in their bedroom (10 per cent), or tickets to see their favourite sports team (11 per cent). When asked what would be hardest to give up for a week during the summer holidays, only a significant minority of 6 per cent said playing with toys.

71 per cent of the children use their device to play games and apps, watch videos and listen to music and 78 per cent claim to have taken a selfie with 26 per cent having shared this photograph online.

This emerging bond looks likely to play out well for the economy in future, with three quarters (75 per cent) of boys aged 7-11liking the idea of working with new technology when they grow up, verses 53 per cent of girls. And the feature that the majority value from a job above working with animals, helping people and being famous? Earning lots of money (39 per cent). The least appealing featureA job that is similar to what my parents do (18 per cent).