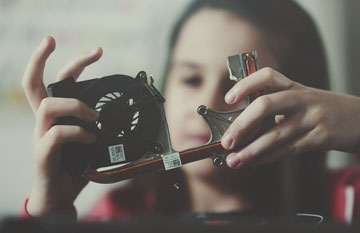 Research released today by the Institution of Engineering and Technology (IET) to mark the launch of its Engineer a Better World campaign, states that only 7 per cent of parents would encourage their girl to pursue a career in engineering.

In addition, the research also reveals that parents could be limiting their child’s future career decisions by having outdated perceptions of the jobs they think boys and girls are interested in.

Parents of girls stated that their child would be most interested in pursuing a career in education and childcare (32%), the arts (29%), healthcare (26%) and hair and beauty (23%). In contrast, parents of boys stated that they thought Information Technology (47%), Sport (33%) and Engineering (28%) were all sectors that would appeal to their child.

Yet even though STEM subjects seem to be popular among girls, only 6 per cent* of the engineering workforce in the UK is actually female.

As part of the research, IET also explored the perceptions of the engineering profession amongst parents and their children. When asked what they knew about engineering, 54 per cent of children stated that they didn’t know anything about careers in the industry. When it comes to their interest in pursuing a career in engineering, girls are twice as likely than boys to say that they are not interested in finding out about careers in Engineering (11% vs 5%).

Furthermore, two in five parents (41%) stated that if asked by their child for advice about a career in Engineering, they feel they wouldn’t know enough to support them. This figure is even higher among the parents of girls, with almost half (44%) saying they don’t know enough about engineering to help.

“The research also shows that there is a growing need to change perceptions of what modern engineering is and what it can offer girls in terms of a career. The key to doing this is by changing the perceptions of parents who are highly influential in their child’s decision making processes and showing them that engineering doesn’t have to be a messy, mechanical or physically demanding career choice.

“In order to do this, IET has joined with a number of industry stakeholders to develop the Engineer a Better World campaign, which looks to engage with parents and their children about the exciting career opportunities that engineering has to offer. It’s only by making the right resources and information available that we can ensure the engineering sector of the future has the rich and diverse mix of talent it needs to carry on growing and innovating.”

Paul Jackson, Chief Executive of Engineering UK, said: “As a community we need to overcome negative and/or outdated perceptions of engineering to encourage ‎more young people to consider it as a career option.

“Campaigns such as Engineer a Better World help showcase the range of fantastic opportunities offered by engineering and crucially, give parents the information and tools they need to support the potential engineers of the future.”

As part of its research, IET also gave parents and children some information on the exciting careers available in the engineering sector. After seeing a little information on some of the careers available, both parents and children were much more interested in what the sector had to offer. In fact, 72 per cent of parents agreed that they would encourage their child to pursue engineering as a career – an increase of 30 per cent of respondents before having seen the information.

In addition, before being more informed, fewer than half of those parents with girls would encourage their daughter to pursue engineering. Having seen the information this figure rose from 45 per cent up to 67 per cent – an increase of almost 50 per cent. The figure also rose substantially among girls themselves rising from 32 per cent up to 61 per cent – a very substantial rise of 90 per cent.

For more information about the Engineer a Better World Campaign and to read the full report, visit
www.engineer-a-better-world.org