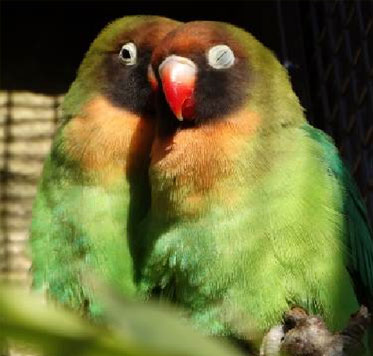 Just in time for Valentine’s Day, the Burford collection debuts a new bird species at the Park. For the first time in its fifty-year history, Cotswold Wildlife Park is home to a magnificently coloured flock of Black-Cheeked Lovebirds (Agapornis nigrigeni) – believed to be Africa’s most endangered Parrot.

Social and affectionate, the name 'Lovebird' comes from the Parrots' strong, monogamous pair bonding and the long periods which paired birds spend sitting closely together. Arguably no animal represents the sentiment of Valentine's Day more than the Lovebird. The Oxford English Dictionary even refers to the romantic link in their definition:

1. a small African Parrot (= a bird with brightly coloured feathers)
2. lovebirds [plural] (humorous) two people who love each other very much and show this in their behaviour.

The association between Valentine’s Day and the term ‘Lovebirds’ dates back to the Middle Ages. Scholars typically cite Geoffrey Chaucer’s poem Parliament of Foules as the first reference to St Valentine's Day as a day for lovers. Lovebirds have been mentioned in literature and music throughout history: Bleak House by Charles Dickens, Cole Porter’s lyrics to Let’s Misbehave and I’m in Love Again, Aretha Franklin’s ballad Without The One You Love and in Amy Winehouse’s song October. Written in memory of her pet bird Ava, named after movie star Ava Gardner, in an interview with Mojo magazine in 2008, Amy was so heartbroken when the bird died, she wrote a song in her honour.

Europeans were first introduced to these birds in the early 20th century. Birds were trapped extensively from 1908 until a Zambian trade ban was implemented on wild-caught birds in 1930 (although trade appeared to continue until the 1960's). Scientists now estimate there are fewer than 10,000 Black-Cheeked Lovebirds left in the wild. Trapping of wild Black-Cheeked Lovebirds has been banned and they are currently listed as vulnerable on the International Union for Conservation of Nature’s Red List of Threatened Species.

Black-Cheeked Lovebirds are highly dependent on surface water supplies - they need to drink at least twice daily to survive. Zambia is a landlocked country in southern-central Africa. Black-Cheeked Lovebirds inhabit the driest region of Zambia. Drinking water is vital since their food is low in moisture. They are highly cautious drinkers and will not drink if the water resource has been actively disturbed by humans or livestock. As water bodies within its highly localised range diminish, so do wild population numbers.

Visitors can see the new Black-Cheeked Lovebird flock in their exhibit near the entrance of ‘Madagascar’. They are one of three new bird species to join the Burford collection. The Western Moustached Laughing Thrush and Red-Billed Blue Magpie are also on-show to visitors.