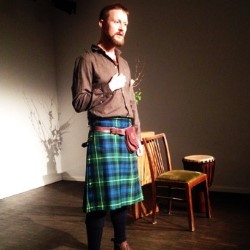 Supernatural: Wonder Tales from Scotland is an hour in the company of storyteller Dougie Mackay, whose stories were all based on supernatural creatures of Scotland. Dougie is a charming host and quickly hit it off with the audience, asking for suggestions - from adults as well as children - and creating an easygoing, relaxed atmosphere.

The show started with some riddles, great fun and an effective way to get everyone comfortable calling out and thinking a bit outside the box. Dougie worked with minimal props: a large storyteller’s chair sat at the front of the room, with a few items on the table next to it and a couple of reminders of Scotland’s ties with the sea in the corners. This meant he had to keep the audience’s attention with only his words, which he did skilfully; the occasional use of a drum heightening the tension of a story when needed.

The day we were there the audience had a few more adults than children, and both children and adults clearly enjoyed the stories, judging by the various reactions, the laughter and the applause at the end. The age recommendation for Supernatural is 8+ and if you have children this age who enjoy stories you won’t go wrong - the bonus is you’ll enjoy it it just as much.

Heather, 10, thought that “ the stories were excellent and I liked the music” while Doris, 11, said “I thought it was really good storytelling and it included people in the audience just enough.”