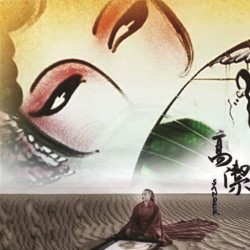 We weren’t sure what to expect from Sand Fantasy Art from China but were quickly entranced. The whole experience was peaceful and relaxing, with a fair bit of awe at the skill on display!

The sole performer is Echo Gao, an artist from China, who creates three beautiful pieces of art during the show. She works with light, sand, and ink in water; and all of the art is broadcast onto a large screen as she creates it. Most of the time we were watching the screen as the stories unfolded, but when I did glance over at the artist it was fascinating to see her at work. The theme of the show was love, as portrayed through Chinese legends. The show is performed with no talking, and only the title is written to appear on the screen.

Echo Gao relies on her art to tell the stories, which it does beautifully, the audience gasping in amazement as various blobs are skilfully manipulated to become scenes from a love story. The performance is accompanied by music, which echoes the emotions of the stories.

This is very different to most other Fringe shows, but very special. It felt like waking from a dream when the artist came forward at the end to say a few words, before receiving an enthusiastic round of applause. See it if you can!

My 11 year old said “Beautiful art from a talented artist” while my 15 year old thought Sand Fantasy Art from China was “really well put together. It was beautiful and impressive and overall very good. I would give it 5 stars”.