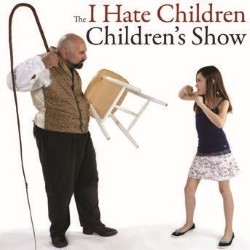 The I Hate Children Children's Show is definitely the edgiest kids' show I have every watched. As suggested in the title, there is nothing saccharine in this show. There is no bitter taste, either, as the magician skilfully strikes the right balance between laughing at and laughing with the children.

The 'scenery' is very simple; just a cart full of magic trick material parked at the side of the stage. That is all that is needed as the venue is intimate and the interaction between the comedy magician and the audience is the basis of the show.

The entire show is soundtracked by a live guitarist who does a great job of accompanying the banter. The magician has a wealth of quality material; very funny jokes, fab magic tricks and silly songs, but it is the children who provide the springboard for his show. They are invited onto the stage to sing and dance with the magician and to take part in the magic tricks, as well as be the butt of his 'child-hating' jokes.

There are loads of original, hilarious ideas and you really cannot predict what the comedy magician is going to say or do next. My 6 year old really enjoyed the show but the recommended age suggestion for this show of 8+ is just right; my 9 year old was able to get the jokes much better.

Confident kids who like to join in and are able to laugh at themselves will definitely get the most out of this show.

"I thought it was all really funny but I especially liked the parts with the magic bag." - Harry,  aged 6