THE HIPPODROME, BRISTOL, UNTIL SAT 23 NOV

From the opening sunrise, as Rafiki (Thandazile Soni) calls the animals to Pride Rock with her breathtaking cry, to the joyous swelter of movement and colour that brings down the curtain, Disney’s latest stage production of ‘The Lion King’ raises the entertainment bar at every turn. Remaining true to the movie and featuring Elton John’s well-established chart-busters, the production demands – and receives – absolute dedication from its performers, costume designers, choreographers and, crucially, puppet-makers.

The parade of animals, including, would you believe, an almost life-sized elephant, proceeding through the audience and onto the stage, makes a jaw-dropping opener.  The tempo is driven by two percussionists in boxes either side of us, as the story of King Mufasa (Jean-Luc Guizonne), his son Simba (Dashaun Young), Nala (Josslynn Hlenti) and the scheming Scar (The West Country’s own Richard Hurst) unfolds against a luscious backdrop, the African savannah brought to life with vivid scenery and grasslands animated by the dancers themselves.

The creatures including warthog Pumbaa (Carl Sanderson) and meerkat Timon (Steve Beirnaert) are part human, part puppet, and it’s delicious to watch the performers hiding in plain sight as they express emotions through their beautifully crafted masks.

The ensemble pieces, particularly the lionesses who dance to exquisite African harmonies, are breathtaking.  And at the heart of the show are the extraordinary talents of the child actors playing the young Simba (Hunter Del Valle Marfo) and the young Nala (Minaii Barrowes), two of 10 equally gifted children who perform throughout the production’s run. They carry the show with a confidence, sure-footedness and sheer flair in complex roles which would flummox far more mature performers. Despite the multi-national origins of this show, every audience member leaves the Hippodrome with a little bit of Africa in their hearts. (Mike Gartside) 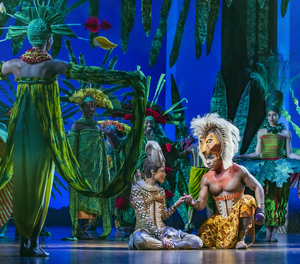